Elves are considered to be the most elegant and graceful of all the races in the Material Plane in the world of Dungeons and Dragons. They thrive in forests beaming with eternal beauty, or spires where they embrace and become one with nature. Moreover, Elves are known for their finesse with both blades and bows. They have superior marksmanship compared to other races and they are, undoubtedly, feared by many in battle.

Elves rarely make contact with outsiders, especially with humans, but most of them make a good trade by selling their handicrafts to markets or trading fine metals which they cannot produce on their own.

Like most races, the Elves were also divided into different subraces, scarred by their indifference to their ancient beliefs and culture. These three subraces are the High Elves, the Wood Elves, and the Dark Elves, commonly known as Drow Elves.

In this name guide, we’ll discuss a specific subrace of the Elves; The Drow Elves. We’ll introduce you to a list of some Male and Female Drow Names Suggestions, and include some Drow City Name Ideas at the end of this guide. 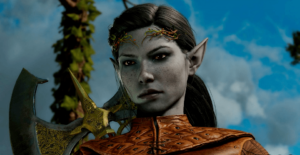 Take note that you may always create your version of Drow names or Drow city names when starting your DnD adventure. But for some who find this tiring, a name generator might help. Our Random Drow Name Generator provides users hundreds of name ideas and suggestions that you could use as-is or as a reference in creating a Drow character.

Who are the Drow Elves?

Not all Elves are fond of the goodness of nature nor enjoy the illumination of the sun basking among their forests. Some of them detest the good and would rather dwell in evil and corruption.

The Dark Elves descended from an ancient subrace of dark-skinned elves. They were also called the Drow and were banished from the surface world for their worship of the evil goddess, Lolth. There are many known titles for the Drow such as Deep Elves, Night Elves, and sometimes The Ones Who Went Below the surface.

The Drow were feared and hated by most people for their cruel minds, although some say that there are very few existing Drows who were not born evil and aligns with the righteous.

The Dark elves built their civilization in the depths of the Underdark, fashioning this Drow city into the way and liking of Lolth.

Drow Elves’ appearance is easily distinguished by their black skins that greatly resemble refined obsidian. They have whitish or pale yellowish hair and pale eyes. Their eyes are so pale, some mistake them as white. Other than that, few of them possess eye colors with shades of lilac, silver, pink, red, or blue.

Compared to their other elven cousins, Drow elves seem to be much smaller and thinner.

Similarities with Dark Elves of Skyrim

Dunmers are the Dark Elf version from The Elder Scrolls saga. They physically resemble the Drow elves from DnD but they are very different in terms of culture and origin.

Dunmers from The Elder Scrolls saga were originally called the Chimers and do not originally possess their dark skin tones. The Chimers were cursed by the daedric goddess Azura for their betrayal of the Dwemers (dwarves), and for murdering their king; turning their eyes red, and their skins ashen.

Below is a summary of Drow Elf’s racial features and ability traits.

Drow names follow the same naming convention as with common Elf names. However, their names have harsher tones, most probably because of the way they speak and say words in the Underdark.

Drow names are unique and reflect the personality of the elf with very little distinction between male and female names. Since Drow Elves who travel with Humans are very rare, they do not translate their names in the Common tongue and rather use original Elvish names instead.

Not in the mood in making your names? Try our Drow Name Generator for name recommendations and ideas—for free!

Below are some of our suggested elven names Drow players can use, including a brief backstory and description for each.

More male and female name suggestions via our DnD 5e Drow Names Generator. Our name generators contain hundreds of name suggestions and ideas that players can freely use for their next DnD adventure!

Most Drow cities are typically similar with common elven architecture. The design, construction, means of building, and emphasis on beauty and artistry are all seen in Drow city’s structure, table, and pillar, and other furniture.

Since Drow elves do not prefer sunlight, Drow cities are located beneath great mountains, hollowed caves, or even underground. This makes their cities impenetrable especially for surface dwellers who do not have any maps or visual ideas on how Drow strongholds look like.

The Drow Elves are versed with carefully shaping stalactites, stalagmites, and cave columns. They build bridges made of stones instead of wood, and they create spiraling tunnel networks that expand throughout their underground city.

Drow structures do no only display utmost beauty, they can also withstand earthquakes and other perilous disasters that may occur underground. Despite displaying Elven beauty in their architecture, a common Drow city will tend to be chaotic and messy in look because of the lack of uniformity in their architectural style.

Magic plays a huge role in Drowcity constructions. They use their spells to carefully almost impossible building foundations to make it stronger and withstand natural disasters. These foundations, however, collapse when not enough magic is supplemented as these magical effects wore off in time.

Drow cities are named using elven words. City names are commonly named after their founders’ last names, or to describe the greatness of the city itself. There is no official elven dictionary yet for D&D, only a set of compiled known elven words from playbooks and lore. Therefore, city names can also be provided and created by players; after all, D&D is about expanding your world and doing personalized adventures.

In creating your own Drow city name, always remember that the name should sound melodic to denote its elven origin, and you may or may not use two words.

Also, apostrophes and dashes are acceptable in combining two different elven words to produce a city name. Oh, and don’t forget to put exaggerations in spelling and pronunciation to make your city name stylish and regal.

Below are some of our suggested Drow city names.

The great city Thul’Drasshar is known for its impenetrable underground defenses that keep outsiders lost within its tunnels. It is said that these tunnels are enchanted which makes it impossible for a non-Drow to traverse.

The ancient city of Elfrannaar was once a High Elf stronghold until it fell to the hands of the Drow who pillaged the city to ruins. Despite the ruined look of the current city, the vast expansion and improvement beneath it is truly a majestic sight to those who haven’t seen Drow architecture.

Translates to The Heart of Lindran, is a great Drow city named after the fallen Drow hero Lindran the Tormented, who defeated the underground wyrm Kashdrim. It is said that the city was created in the very bones and ashes of the deceased wyrm.

Itching for some fun-to-use Drow names in your next DnD adventure? We got your back! Check out some funny Drow names we compiled just for you!

For more Drow names, whether for ideas or suggestions, you may visit our DnD 5e Drow Name Generator. Our name generator contains a variety of unique names that players can use for their next DnD adventure! What’s best about it is it’s absolutely free!